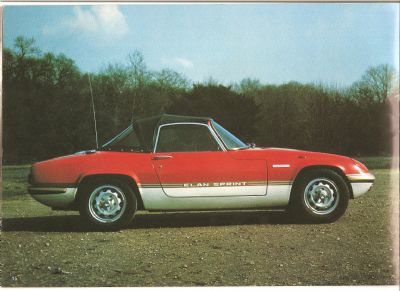 The differences over the S4 introduced by Lotus on the Sprint were integrated over a period of time. Most of the changes were made to production cars by mid 1971. Later changes made during the Sprint’s production run are also included below.

The fail safe distributor rotor arm (rev limiter) was modified to be activated at 6750rpm instead of 6500rpm. Late in Sprint production, the distributor type was changed for the Domestic and European markets, from the Lucas 23D4 41189A to the 25D4 41225 model.

The exhaust pipe silencer unit became a straight through single unit, replacing the twin pipes of the S4. The intermediate pipe was also lengthened and a heat shield fitted above the silencer.

A blanking panel was fitted below the radiator to improve air flow. The electric cooling fan motor, brackets and fan were changed during production to a larger motor and four bladed metal fan.

Nearside engine bay heat loss holes were standardised in the Sprint.
Drivetrain:
Drive shafts had a fail safe device fitted, the purpose of which was to hold the shaft in place if the Roroflex coupling broke. Revised front brake calipers were fitted. The differential mounting was strengthened by inclusion of a brace between the top mounting points.
Strengthened Rotoflex couplings were also introduced. Tony Rudd was reported on his investigation into Rotoflexes in a 1971 Motor Sport article “When I visited Lotus some months ago I spent quite a while discussing the relative merits of Rotoflex couplings and sliding spline and universal joints in the rear drive shafts with Tony Rudd, the firm’s Director of Engineering. Rudd had been dubious of the Rotoflex or doughnut coupling before he joined Lotus and agreed that the diabolical surge they caused had to be cured. To this end various experiments were tried when he joined the firm, one of which was the use of the more conventional u/js. However, for some reason, concerned with the elasticity of the doughnuts, the handling undoubtedly deteriorated considerably using the metal joints. So Rudd did quite a lot of research on Rotoflex couplings and after a couple of improvements has now come up with one that almost entirely eliminates the wind up. These are naturally somewhat more rigid and perhaps, because of this, the ride seems to be a little harder than on the earlier and exceptionally smooth riding Elans.” [Copyright Motor Sport]
Export Models:
The European spec also included a hazard switch and light system, the switch being mounted below the ashtray, between the fan and lamps switches. The instrument bezels were recessed flush with the dashboard.
Federal Sprints retained the Stromberg carburettor setup and included crossover pipes to feed heated air into the inlet manifold. Thus the bonnet bulge was retained on Federal Sprints. These engines also had different timing, compression ratio and cam shafts fitted. As with the domestic Sprints, early Federal Sprints were S4 bodies with Sprint mechanicals; indeed some Federal S4s were changed to Sprint spec by the factory. The majority of the following differences were introduced on Federal S4s (and some on the S3 SS models), but I have no specific data on when exactly. Running lights were fitted to the rear flanks and front set of fenders (bumpers), the sidelight fitting was omitted, leaving a blank in the fibreglass, the hazard warning switch was fitted as well as hazard, handbrake and brake fail lights on the dashboard. The bonnet pull was located on a bracket under the dashboard, below the warning lights. The instrument bezels were recessed flush with the dashboard. The glove compartment door was fitted with a lock. Failsafe headlights with a single vacuum cylinder were fitted, which meant that the headlights rose up if the car was not used after a period of time. Dual circuit brakes were fitted with a larger plastic master cylinder. Hexagonal nuts replaced spinners for the road wheels. The rear lamp cluster had different bulbs and direction lights fitted and operated from a DB10 relay box. The seats had an extended integral headrest in their design. In addition to the VIN plate in the engine compartment, there was a vehicle identity plate fitted at the base of the windscreen, which gave just the unit number, as well as a manufacturers plate located on the inside of the drivers door opening, which gave the month and year of manufacture, as well as the unit number and a Federal emmissions plate on the intake side of the engine compartment.
sitemap | cookie policy | privacy policy | accessibility statement